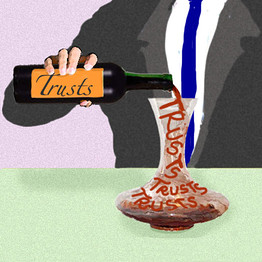 Irrevocable may not mean what you think it means when it comes to trust planning.  Thanks to a process known as “trust decanting,” a trustee can change irrevocable trust terms. The decanting process occurs by figuratively pouring the trust assets from an old trust to a new trust agreement.  Just as one decants wine by pouring from an old bottle to a new one, a trustee can move trust assets to a new, more favorable trust. Nevada, along with 20 other states, has very favorable decanting laws in place.

There are limits as to what can be accomplished with decanting.  Trustees cannot alter a beneficiary’s already-vested interests in a trust.  However, a trustee can push back the age at which the beneficiary receives a payout.  Importantly, the trustee can change the governing law of the trust by moving the situs of the trust.  Nevada is the premier domestic self-settled spendthrift trust state so many trustees look to move their assets to Nevada.  In addition, if there is no successor trustee named, decanting can make it possible to name a proper successor trustee.

Nevada law is very favorable because there is no statutory requirement to notify beneficiaries of the decanting.  The trustee does not need to provide beneficiaries copies of the existing or new trust documents.  These privacy protections greatly favor the use of Nevada trust laws.  The trustee has discretion to seek court approval for the decanting process but is not required to do so.  In reality, the vast majority of trustees seek beneficiary approval before starting the procedure to decant the trust assets.

There are uncertain implications for gift, income, and generation-skipping transfers taxes. The Internal Revenue Service has not issued guidelines related to the federal tax issues presented by decanting.  However, the IRS has solicited comments for several years now and guidance should be forthcoming.  Even without federal income tax guidance, there are state income tax savings to be achieved by moving trust assets to a state like Nevada without income tax.

On June 4, 2011, Governor Sandoval signed Senate Bill 221 which strengthened Nevada’s already outstanding self-settled spendthrift trust laws.  The most beneficial aspect of the new legislation relates to changing the situs of existing asset protection trusts to Nevada without restarting the statute of limitations period.  Nevada has two primary advantages over the other 13 states which permit self-settled, spendthrift trusts.  First, Nevada is the only state without a statutory exception allowing creditors to pierce the trust.   Second, Nevada has the shortest statute of limitations period to protect a transfer to the trust.

The new bill specifically allows charitable remainder trusts, qualified personal residence trusts, and grantor retained annuity trust to qualify under the statute.  Also, the bill allows the settlor to use real or personal property owned by the trust without limiting the scope of the protection provided by the spendthrift trust.

2. Tacking of Statute of Limitations Period for Trusts Migrating to Nevada

This new provision allows settlors who have established asset protection trusts in other states with less favorable laws to change the situs to Nevada without restarting the statute of limitations.

The bill clarifies that later transfers in trust are disregarded for purposes of determining whether a creditor may bring an action with respect to an earlier transfer to the trust.  The new language makes clear that a more recent
transfer for which the statute of limitations period has not run will not spoil
the whole trust.

6. Limitation of Actions Against Spendthrift Trust

This provision clarifies that no action of any kind may be brought at law or in equity against the trustee of a spendthrift trust if at the date the action is brought an action by a creditor with respect to a transfer to the spendthrift trust would be barred.  Prior to this, questions arose whether Nevada’s four year statute of limitations for fraudulent transfers applied in lieu of the two year statute of limitations period for spendthrift trusts. In addition, a creditor may not bring an action with respect to a transfer of property to a spendthrift trust unless the creditor can prove by clear and convincing evidence that the transfer (i) was a fraudulent transfer or (ii) “violates a legal obligation owed to the creditor under a contract or a valid court order that is legally enforceable by that creditor.”

7.  Unauthorized Agreements by Trustee are Void

SB 221 clarifies that the settlor only has rights and powers conferred specifically in the instrument, and any agreement between the settlor and trustee attempting to grant or expand those rights is void. This provision solidifies the use of the NV self-settled spendthrift trust as a completed gift trust, which will bolster its use as an estate tax avoidance method.

You can contact an experienced Nevada estate planning attorney at 775-688-3000.